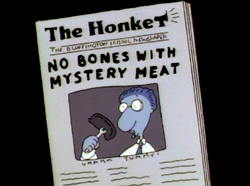 The Weekly Honker is a student-run newspaper at Bluffington School. Chalky Studebaker is in charge of the paper.

In Doug's Cartoon, Chalky prints a comic Doug created of the school lunches, which caused Mr. Bone to confiscate all the printed issues and suspend the paper. Doug, after getting tired of everyone trying to rally behind his comic, comes to an agreement with Mr. Bone about the newspaper. However, he later declines Mr. Bone's additional demands to eat the school lunch. Right as Mr. Bone officially announces the paper is finished, Principal Buttsavich calls him and tells him he saw Doug's comic and thought it was hysterical. Because of his comic, Principal Buttsavich took magic mystery meat off the school lunch menu.

Retrieved from "https://doug.fandom.com/wiki/The_Weekly_Honker?oldid=11437"
Community content is available under CC-BY-SA unless otherwise noted.