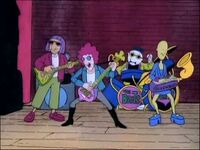 The Beets are a popular band featured in Doug. They are popular among the kids of Bluffington, and the favorite band of Doug Funnie, Porkchop, and Skeeter Valentine.

Retrieved from "https://doug.fandom.com/wiki/The_Beets?oldid=13752"
Community content is available under CC-BY-SA unless otherwise noted.