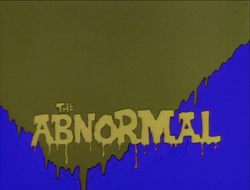 The Abnormal is a horror film seen in the episode Doug's Nightmare on Jumbo St. The movie was so terrifying that it gave Doug nightmares.

An extraterrestrial spacecraft lands in a portion of an unknown city, destroying a skyscraper. A police office and a doctor are investigating the crash site. The police officer mentions it belonging to a shapeshifting creature from the "Upper Thalmus Galaxy" that abducts human to exhibit them. When the doctor questions the officer about how he knows so much, the officer's shadow appears over the doctor and begins transforming into the creature. In a very monstrous voice he replies "That's because......I'M ABNORMAL" and supposedly attacks him.

Back at the Doctor's office, the doctor is sitting on an examination bed with a creepy grin on his face. The nurse is taking his blood pressure and as she's looking at the reading, the doctor's shadow begins morphing into the abnormal, the screen flashing red as the nurse screams in terror.

A spaceship crashes through a house as a man and woman, presumably a couple, witness it. The man bravely proclaims "The abnormal's in that building, and I'm going in after it." to which the woman replies, "Oh no! Be careful!". As the man investigates the house, he finds a cat which he gently bends down to pet, as the door behind him slowly opens and the Abnormal's leg steps out of the shadow. As the man holds and pets the cat, the Abnormal inches closely behind him and sticks it's arm out. The cat notices this and shrieks in terror and the man quickly turns around to witness The Abnormal. They slowly back away as it approaches them, the cat, who is now on the man's head covers his eyes and tries clawing it as the screen flashes red and the man screams.

This part of the movie is only seen at the end of the episode when Doug finally manages to watch the entire thing without closing his eyes.

The Abnormal's full appearance is revealed and it's zipper is noticed in the back, showing that it's only someone in a costume.

Retrieved from "https://doug.fandom.com/wiki/The_Abnormal?oldid=11519"
Community content is available under CC-BY-SA unless otherwise noted.