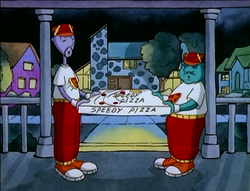 Speedy Pizza is a pizza delivery service seen in Doug's on his Own.

Doug calls for delivery from Speedy Pizza in Doug's on his Own, but it took them over an hour to deliver it. After Doug mentions this, Eric replies "Yes, they should really change the name, shouldn't they?" Doug, after watching a horror movie, becomes suspicious of them and asks them to hand him the pizza through the mail slot.

They have a minor appearance in one of Doug's imaginations in Doug's Huge Zit.

Retrieved from "https://doug.fandom.com/wiki/Speedy_Pizza?oldid=12862"
Community content is available under CC-BY-SA unless otherwise noted.