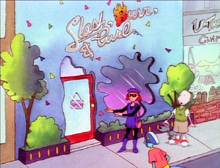 Slash, Burn & Curl is a barber shop seen in Doug Gets His Ears Lowered. It was recommended to Doug by his sister, Judy. The barber shop is known for it's loud music and eccentric, hardcore hairstyles.

Retrieved from "https://doug.fandom.com/wiki/Slash,_Burn,_%26_Curl?oldid=12738"
Community content is available under CC-BY-SA unless otherwise noted.