Student...
...at elementary school (Nickelodeon)
...at middle school (Disney)
The Pulverisers' pitcher
The Lady of Excalibur

Patricia [1] "Patti" Mayonnaise (born October 12th, 1980) is a main character in the Nickelodeon and Disney animated series Doug. She is the only daughter of Chad and late Mrs. Mayonnaise.

The secret love interest (later girlfriend as of the movie) of Doug Funnie and the nicest character in the series, Patti is a talented athlete who is also a top student in the 6th grade at Bluffington School (7th grade at Beebe Bluff Middle School in the Disney version).

In the original Nickelodeon series, Patti has dark skin and wavy blonde hair.

In the Disney version, Patti looks mostly the same, however she has slightly lighter skin and her previously wavy blonde hair is now straight and is styled in a pixie cut. She also is shown wearing blue hoop earrings in her now visible ears.

For more on Patti's outfits, go to Patti Mayonnaise/Outfits

In the Nickelodeon version (AKA the original version of Doug), She mostly wears a blue long-sleeved shirt with purple polka-dots and purple trim, a dark blue short skirt, white socks, one of which is slightly shorter than the other and purple and white sneakers.

In the Disney version of Doug, Patti wears a light blue version of her blue and purple polka dot long-sleeved shirt with purple trim, dark blue long-legged jeans that stop just short of her ankles and pink slip-on shoes.

Patti is a native of Bluffington and lives with her wheelchair-bound father Chad. Patti's mother, Madeline, died in a car accident, which also left her father paralyzed, prior to the series. Not until the Cartoon Network run of the show does she get a new stepmom.

Despite these events, she continues to hold a positive attitude on life and does her best to enjoy life with her friends and family.

However, she’s far from perfect, as she’s also rude at times, particularly when she's hungry, and is prone to lose her cool if pushed too far. She also won't stop at bragging when it comes to finally winning a game.

Nevertheless, she’s generally a kind and supportive friend and is not afraid to step in if one of her friends is being bullied.

Not only is she an ace student, but Patti's also an accomplished athlete and good at anything to do with physical activity, in particular ballet, bowling, weightlifting, baseball, and basketball; and on top of that, she's a pro at the beet-centric sport Beetball. In fact, speaking of baseball, she’s the Pulverizers' best batter and pitcher!

She also has a very strong competitive streak, especially when it comes to sports.

Relationships with other characters

Patti always gets along with the other characters in the show, be it in school, or around Bluffington. (Exceptions exist.)

“...And Patti and I danced on the dock, under the moon, for quite some time. I wouldn't have minded if it had gone on forever.”
―Doug Funnie on his dancing with Patti, the final line of the series as a whole[src]

It’s obvious that the one relationship she is known for is with Doug Funnie. Throughout both runs of the series he has a secret crush on Patti, and many of his Smash Adams and Quailman daydreams involve her as the damsel in distress.

They’re best friends, and they usually get along well, but they have had conflicts before; however, they always sort it out by the end of the day. The two won't hesitate when it comes to working together; in "Doug and Patti P.I." and when the bumpers for the Bumper Sticker Race goes missing, Doug works together with Patti to unmask the perpetrator.

Interactions in the Nickelodeon show

When they first met, Patti was exceptionally nice and forgiving to Doug.

The first time her affections for Doug were explicitly shown was in season one's "Doug to the Rescue" after he psyched Roger for getting her detention.

In season three's "Doug's Magic Act", after getting handcuffed to one another, making her miss planned events, Patti tells Doug she isn't going to talk to him after they missed getting to the magic shop in time before it closed to get the handcuffs taken off. She also tells him he is very selfish.

However, Doug, feeling guilty, opens up to her and says that she is all he thinks about. He realizes his mistake and blames himself. Patti forgives him and tells him he is her favorite person to be around. They then hold hands.

In season four's "Doug & Patti Sittin' in a Tree," Patti asks Doug out to the movies and afterward, the two consider that it was a date, but try to laugh it off. They almost kissed, but Patti felt somewhat scared as if she seems to have feelings for Doug.

In season four's "Doug Throws a Party", when Doug refuses to take off Connie's hat because he doesn't want to embarrass her, Patti compliments him for his decision, saying that it was "the most grown-up thing anybody's done tonight", and that his decision was sweet of him, and she kisses Doug on the cheek.

Interactions in the Disney show

While the interaction in "Doug Throws a Party" was how far the relationship got in the Nickelodeon run of Doug, the Disney run of the show added Guy Graham, who had a crush on Patti since "Doug's Big Panic", as well. Throughout the Disney run, Doug and Guy become rivals for Patti's affection. In the final episode of Disney's Doug, "Doug's Marriage Madness", Patti asks Doug out on a date-date.

Throughout Doug's 1st Movie, Doug continues to compete with Guy for Patti's affection; when Doug fails to show up at Swirly's to discuss the dance, and when he reveals that he had not caught the monster Herman Melville (despite having done so, to keep Herman's existence a secret), Patti becomes resentful of Doug in favor of Guy.

This rivalry comes to a head when Doug reveals to Patti that Guy fabricated an article where Mr. Bluff was revealed to have killed Herman Melville. Patti dumps Guy (literally by pushing him in the lake) and goes out with Doug - the date-date she had requested in "Doug's Marriage Madness". By the end of the movie, Patti is seen dancing with Doug. (Doug remarks that he and Patti danced "for quite a while".) This can lead to some to conclude that by the time the series ended, Doug and Patti were a couple.

Skeeter Valentine is Patti's other best friend. He has known Patti since she was little, and was the one who introduced Patti to Doug. They get along well, and when Doug's not around, Patti hangs with Skeeter.

In fact, they have known each other for longer than Patti has known Doug!

Connie Benge and Beebe Bluff are both considered to be Patti's closest friends. If she's not with Doug nor Skeeter, she can be seen with either or both.

Throughout the Cartoon Network run of the show and ever since "Doug's Big Panic", Guy Graham has a more obvious crush on Patti that Doug does, which Patti vehemently denies, having known Doug for longer. Near the end of the series, he stops pursuing her, recognizing that she does have feelings for Doug.

However, they stay friends, and in the movie work together to organize the dance, until the whole Herman Melville debacle (which Guy brought on himself) and the revelation of Guy's pact with Bill Bluff in the latter's attempt to pollute Lucky Duck Lake ended this relationship, with Guy's winning streak (in advances towards Patti, anyway) being nullified.

While she is friends with (to a fault), and gets along with, him (sometimes), Patti sees Roger Klotz as an annoyance, this because she is the very reason Roger passes certain classes. One time, he annoys her and actually got Patti (and himself... and Doug and Skeeter) detention, having pushed her imminent rage to its limit. 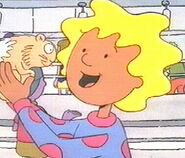 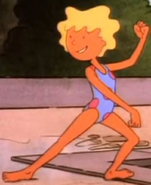 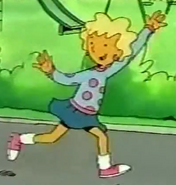