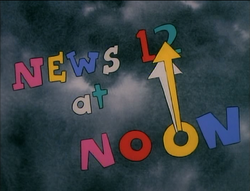 News at Noon was a student-run news show at the Bluffington School. It was first seen in Doug's Big News.

Mrs. Wingo's class put together a news show for the school. Although their class thought it was good, Mr. Bone was not happy with it. The following day, Roger attempts to use the broadcast to "butter up" Mr. Bone and then shows the tribute video the class worked on, and credited it to himself. Meanwhile, Roger had tampered with the pre-written news reports, so Doug announced that "Mr. Bone wears pink underwear" over the air. Mr. Bone fires everyone but Roger from the news show which caused everyone to get mad at him for sabotage.

The next day, Mr. Bone and Roger host their own version of the show from inside the assistant principal's office. Doug comes up with a plan to get Roger fired and them to get their own show back. They bought Mr. Bone a "present", which they knew Roger would hand to him and take credit for. When the show broadcasted that day, Roger hands Mr. Bone the gift only find out there was a pair of polka dotted underwear inside. Mr. Bone fires Roger from the show and assigns him detention.

The following day News at Noon returns, this time with Mr. Bone being a co-anchor. He also introduces a new segment called "Crime and Punishment" which the camera cuts to Roger writing on the chalkboard in detention hall and yelling at the camera.

Retrieved from "https://doug.fandom.com/wiki/News_at_Noon?oldid=11148"
Community content is available under CC-BY-SA unless otherwise noted.