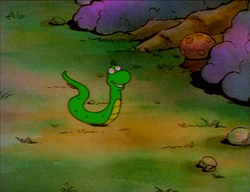 Mr. Scaly was a snake that befriended Doug in Doug Takes a Hike. He is able to communicate through writing in the dirt and shaking his head. He can preform tricks, such as "Up". Although Doug thought he was cool, Roger and Porkchop were initially afraid of him. When Doug brought him back to camp, the other Bluff Scouts crowded around and took turns holding him.

At the end of the episode, Doug releases Mr. Scaly back into the wild.

Retrieved from "https://doug.fandom.com/wiki/Mr._Scaly?oldid=11090"
Community content is available under CC-BY-SA unless otherwise noted.