Any students that break the rules

Lamar Bone (A.K.A. Mr. Bone) is the assistant principal of Bluffington School and the secondary antagonist of the series. Later, in Disney's Doug, he becomes Vice Principal of Beebee Bluff Middle School too.

Lamar Bone loves to discipline kids, and is basically humorless. He’s often an antagonist in Doug Funnie's life, but he treats all of the students just as badly. It appears that he doesn’t care about any of his students and he appears to be so full of himself that he punishes them even if the situation is out of their hands. Despite his strictness, however, he can be reasoned with, once in a while. However, it‘s not explained why his strict and abusive attitude hasn't gotten him fired and penniless. Lamar graduated from Bloatsburg University.

In the episode Doug's Shock Therapy, after Mr. Bone underwent surgery to remove a wart, he briefly regressed to a childish, hyperactive state and began playing pranks on teachers and students. He became much nicer during this time as well, but it doesn't last very long.

Mr. Bone's primary hobbies are yodeling and clog dancing which have earned him many accolades and trophies, some of which he kept at Bluffington Elementary. His yodeling group once opened for The Beets when they performed at the school, and ended up influencing the Beets to write the song "I Need Mo' Allowance," which also prominently features yodeling.

Lamar Bone has shown up in Doug's fantasies as many fictional villains, such as the "Rulemeister" and "Robo-Bone". 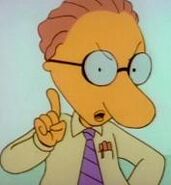 Mr. Bone as a young boy seen in his flashback in Doug's Shock Therapy.

Doug's imagination of him and Mr. Bone in a full body cast.

Mr. Bone as an old man in Doug's imagination.

Retrieved from "https://doug.fandom.com/wiki/Lamar_Bone?oldid=14340"
Community content is available under CC-BY-SA unless otherwise noted.