Judith Anastasia "Judy" Funnie is the older sister of Doug Funnie. She's often seen with a flair for the (overly) dramatic, usually seen wearing only purple and black, and rarely takes off her beret nor her sunglasses.

Judy was born some 16 years ago in Bloatsburg to Phil and Theda Funnie. It was five years later she gained a little brother of her own. She moved into Bluffington alongside her family.

At 16 years old, Judy is the oldest child in her family and while she's never particularly rebellious, she's very dramatic (due to being an actress) and often difficult to deal with.

However, she's very intelligent and artistic and therefore attends the Moody School, a school for artistically talented teenagers. Judy is sometimes tapped to give or direct performances at Bluffington Elementary, and although Doug initially dreads these events out of fear that Judy will embarrass him (as she has done in the past), Judy's productions usually turn out to be well received.

Jim Jinkins once pitched a spin-off series to Disney that would have focused on Judy, but Disney rejected it. At least there are episodes with Judy's name in the Disney show.

She has red hair. She wears a purple sweater dress, a black shirt, black tights, and purple boots.

Doug is her younger brother. Although she and Doug have sibling rivalry like any normal pair of siblings, she loves him and it's very clear that they're close, and her teasing of him is usually good-natured.

Judy is caring of her mother, though questions her authority sometimes. An example is seen in the movie where she questions Theda telling her off for the "mess" she made (it was Doug and Skeeter bringing Herman Melville in the house)

Roger is Judy's secret crush, from his side, anyway. Maybe?

In the Disney version of the show, the Sleech bros seem to take an interest to her. 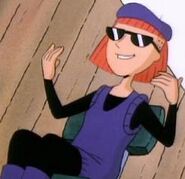 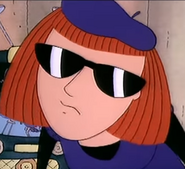 Judy Saying "SILENCE!"
Add a photo to this gallery

Doug's on his Own

Doug is Slave for a Day 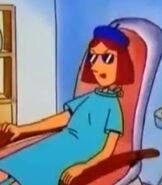 Add a photo to this gallery
Retrieved from "https://doug.fandom.com/wiki/Judy_Funnie?oldid=13996"
Community content is available under CC-BY-SA unless otherwise noted.