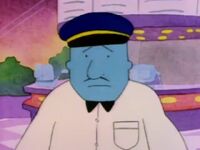 Joe Valentine is Skeeter's father. He has a short-term memory loss and is either unable to finish his sentences or describes the particular thing he is talking about, resulting someone else finishing the sentence for him. He also has a tendency to lose his temper, which results into turning red, and tries to count to ten, only to count to two right before skipping to ten.

In Doug's on Stage, Joe reveals his great-great grandfather played Thaddeus Bluff in the Founder's Day pageant and became angry when he realized Judy was planning on changing it. He convinced Mayor White and Mr. Bone to force Judy to change it.

He is Voiced by Billy West in the Original Nick Series but due to him not being able to go back to Doug, Fred Newman replaced his voice

Retrieved from "https://doug.fandom.com/wiki/Joe_Valentine?oldid=13886"
Community content is available under CC-BY-SA unless otherwise noted.