“...And Patti and I danced on the dock, under the moon, for quite some time. I wouldn't have minded if it had gone on forever.”
―Doug Funnie, final line of the series as a whole[src]

Douglas "Doug" Yancey[1] Funnie (born August 22nd, 1980) is the titular character and chief protagonist of both the Nickelodeon and Disney animated series Doug.

Doug is light-skinned and has short hair, depicted as lines. He’s somewhat fat in the Nickelodeon show, but slimmed down considerably in the Disney show.

Doug was born in the town of Bloatsburg to Phil and Theda Funnie, their second child and only son after Doug's older sister Judy Funnie. At the beginning of the series, Doug's family moves to Bluffington from Bloatsburg after his father was given a new job position there.

In the short time after his arrival, Doug had already formed relationships with many of the local kids, developing a fast friendship with Skeeter Valentine in particular, among others. It was also during this period that Doug developed a crush on a girl named Patti Mayonnaise, which would form the basis for many of his goals.

Doug is an average kid who often comes off as shy and insecure but is a good person at heart who always tries to do the right thing, despite his frequent failures. He’s naive and gullible at times, and fears that people will think of him as a loser. He is quite nice.

He’s a talented artist with a vivid imagination, allowing him to create his own superhero character, Quailman, whose adventures are usually based on exaggerated and impossible interpretations of real-life predicaments that Doug finds himself in.

He sometimes lets his fear and insecurities get the best of him, which causes him to dream up horrifying and chimerical worst-case scenarios to certain dilemmas. These insecurities are often exploited by Roger Klotz and his gang and used to torment him.

However, he’s rather sensitive; he has cried three times in both shows combined. He’s also rather short-tempered; when he or his friends are provoked or annoyed, he’s known to lose his temper quickly, as seen in episodes such as "Doug's Fan Club".

A significant example of this is seen throughout "Doug's Big Brawl", where a simple misunderstanding by A.V. nerd Larry turns to a conflict that leaves Doug filled with rage; to the point he counterattacks when Larry punches him. He punches Larry back, knocking him out.

In this rage-filled state, he can become authoritative and condescending (e.g. Doug's "Got it???" and "Move." in the episode), but he's still the Doug Funnie you all know and love: very nice and friendly, though shy, underneath this rage. When dealing with threatening enemies, like Larry in the episode, he has to remember his dad's advice "show me a man who resorts to violence and I'll show you a man who has run out of good ideas"; that way, by remembering that advice, he’s able to resolve the conflict and become friends. (Also seen in the movie, where he repeats this mantra in a Quailman fantasy.)

Another significant example is in the movie, where he loses his marbles several times, especially when Guy Graham is around; one significant example within the movie was when he lashed out at Herman Melville the monster for losing him Patti, though it was his own doing (the exact quote is "Stop it, you big fish!!! I'm glad we're getting rid of you! You're nothing but bad news!!! YOU LOST ME THE ONLY PERSON I EVER CARED ABOUT!...").

He’s also prone to jealousy, as seen in episodes such as "Doug's Brainy Buddy" where he’s jealous of Skeeter's intelligence.

Douglas is considered to be a very imaginative young man and has created numerous fictional alter egos that he often uses for his comics. He also imagines himself as characters from famous films that he admires when he tries to imagine how his heroes would come out of a difficult situation in which he’s currently in.

Doug is friends with most of the other kids at his school, although he’s often misunderstood by them.

Patti is Doug's best friend and crush throughout the series. Since they met at the Honker Burger, they usually get along very well; however, there are some instances where they don't, though they always apologize and stay friends. Some of his nightmares consist of her potentially rejecting his advances towards her or not being able to save her as a damsel in distress.

His affection for Patti Mayonnaise is an ever-present part of his character, but due to his young age, he is inexperienced in the field of love. Nevertheless, he hopes to someday have a relationship with her.

Throughout the movie, this relationship is almost strained because of both Guy Graham's advances towards Patti (which also actually works for Guy) and the Herman Melville debacle (where Doug has to keep its existence a secret from everyone, including Patti, causing her to lose her faith towards Doug in favor of Guy), though everything goes Doug's way by the end of the movie; Patti dumps Guy and becomes Doug's girlfriend, dancing by Crystal Lake "for quite some time" (in Doug's words).

Skeeter is Doug's best friend, who he met shortly after he first arrived at Bluffington. He helped to introduce him to other local kids. They usually get along in every episode, but in some, they've managed to bump heads, although they always manage to resolve their differences and stay best friends to the end.

Roger Klotz is Doug's archenemy, who always goes out of his way to torment Doug (and to a lesser extent, Skeeter). In times when Roger is feeling down, he’ll be nice to Doug and even confide in him, particularly during "Doug Graduates" when it’s their last day at Bluffington school.

Despite his constant antagonizing towards Doug, there have been instances of friendship between them. In "Doug Saves Roger," Doug even offers to let himself get beat up by Percy Femur (who was tormenting Roger at the time) to save Roger. Roger even treats him to a milkshake at the Honker Burger.

In the movie, Roger confides in Doug, calling him a friend.

Doug is good friends with Al and Moo Sleech. In the twins' first appearance, Doug was rather afraid of them because of their odd personalities, but this was resolved at the end of the episode and the three became friends.

From that point forward, Doug considers Al and Moo two of his closest friends, as proven when Doug, Skeeter, Al, Moo and Porkchop start a lawn mowing business together as friends in Doug Inc.

The Sleech bros are willing to help if Doug asks for it, seen in the movie.

Guy Graham is friendly towards Doug, but the latter takes a big disliking to Guy, likely because of his attempt to win Patti's heart.

Welcome to Doug's Gallery! Come along and explore the many pictures of Bluffington's most interesting resident. 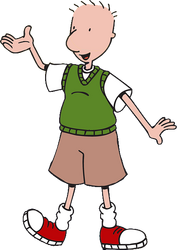 Doug in the Nickelodeon series

Doug in the Disney series 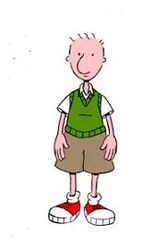 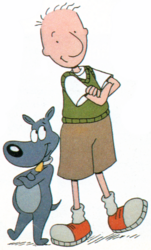 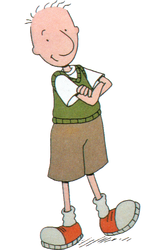