This article is about the TV series. For the series' title character, see Doug Funnie. 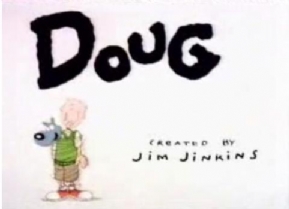 Doug (unofficially referred to as Nickelodeon's Doug only on this wiki) is an American animated sitcom that was created by Jim Jinkins and produced by Jumbo Pictures for the Nickelodeon network, as the first of their successful line of Nicktoons.

Doug premiered on Nickelodeon on August 11, 1991 alongside the other two original Nicktoons Rugrats and Ren and Stimpy. New episodes aired until January 2, 1994 and in reruns until 2002.

From 1996 to 1999, the series was then produced by Disney for airing on ABC's One Saturday Morning block, which included a theatrical movie.

Doug stars 11 1/2-year-old 6th grader Doug Funnie, who had moved from Bloatsburg with his family to Bluffington. It deals with the life and imagination of titular character, grade-schooler and diarist Doug Funnie, his dog Porkchop, and good friends Skeeter Valentine and Patti Mayonnaise.

In "Doug Bags a Neematoad", Doug Funnie and his family (Phil, Theda and sister Judy), come to a new town called Bluffington after moving away from their former residence in Bloatsburg. There he meets his future best friends Skeeter Valentine and Patti Mayonnaise, town bully Roger Klotz and rich girl Beebe Bluff, and his new life in a new town begins.

The Nickelodeon show spanned four seasons with 13 episodes in each, for an initial total of 52 episodes. There were two, 12 minute segments per episode, save for full-length specials such as Doug Bags a Neematoad, Doug's Halloween Adventure, and Doug's Christmas Story.

In the Disney series, there were a total of three additional seasons and all 65 episodes were full-length, bringing the total for both shows to 7 seasons and 117 episodes.

In 1996 Disney ordered new episodes of Doug to be produced (renamed Brand Spanking New! Doug and then later Disney's Doug) which was in production from 1996–1999.

Where can I watch it?

Reruns of the Nick show continued until 2002 on the channel it originated from; it was swapped to the Nicktoons Network from 2002 to 2005. As of 2009, Nickelodeon's Doug airs reruns on MTV Tr3́s affiliates KBEH and KMOH-TV (as a E/I program) in the USA and on Nicktoonsters in the UK. As of 2020, the show can be found in TeenNick's NickSplat block.

Throughout the 90's, Sony Wonder and Nickelodeon Home Video distributed Doug videotapes. These tapes are nowadays quite hard to find.

Nickelodeon's Doug was released on DVD for Seasons 1 and 2 in 2008 and for Seasons 3 and 4 in 2009, and is currently available on digital platforms like iTunes.

There are currently no plans to release the show on Blu-Ray.

Retrieved from "https://doug.fandom.com/wiki/Doug_(TV_series)?oldid=14064"
Community content is available under CC-BY-SA unless otherwise noted.