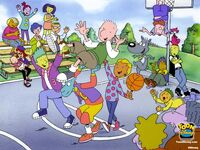 Initially known as Brand Spankin' New Doug!, the show ran from 1996 to 1999 - a total of three years - with 65 episodes total. A theatrical movie, Doug's 1st Movie, also distributed by Disney, was based on the series.

The show takes place a few months after the Nickelodeon show's series finale, "Doug Graduates/Doug's Bad Trip", where Doug and his friends graduate from Bluffington Elementary School as sixth graders, and begin their first year at Beebe Bluff Middle School, as seventh graders.

Like the original show, it deals with the everyday life of socially awkward yet warmhearted Doug Funnie, his humorous best friend Skeeter Valentine, his smart, athletic, and sweet crush and best friend, Patti Mayonnaise, his friends Beebe Bluff, Chalky Studebaker, and Connie Benge, and tries to stay out of the way of local bully Roger Klotz, as well as his rival for Patti's affections, Guy Graham.

The show premiered on ABC as part of their Saturday morning lineup in the Spring of 1996, a few months after Disney bought the rights to the network. In September of 1997, it joined the One Saturday Morning block along with newcomers Recess and Pepper Ann. The show also ran in syndication on what was left of The Disney Afternoon in 1997 for reruns. The show ended in 1999 with sixty-five episodes, which is the episode limit for most of Disney's TV shows.

In January 1999, the stage show Doug Live! opened up in Disney-MGM Studios, and was performed five times daily. Around the time, Doug and Patti appeared as meet and greet characters in the park. Doug Live! closed in May 2001, alongside Doug being removed from One Saturday Morning's lineup. Doug and Patti were retired at the park, however, they do make very rare occasional appearances. The show was replaced by The American Idol Experience in 2008.

The series finale, Doug's 1st Movie, was released in cinemas in March 1999, however it was originally planned for a direct-to-video release until Disney decided to release it theatrically with the success of Nickelodeon's movie The Rugrats Movie. Despite getting harsh reviews from critics, the movie was still a huge success for Disney in the box office.

The movie was released on video only in September 1999 (despite the fact that Disney had entered the DVD market at the time), and there are currently no plans for a DVD release. However, the movie is currently available on DVD, but it contains no bonus features and a cut version of the credits.

The show was planned to be aired on Disney Cinemagic in the near future. Disney has no intention to release Disney's Doug on DVD, however the show was available on VHS in the late '90s. Every episode of the original Nickelodeon series is on iTunes and DVD, the latter as an Amazon.com exclusive.

On November 12th, 2019, the entire series of Disney's Doug was released on Disney+ streaming service, as well as Doug's 1st Movie.

While the Nickelodeon series got a small amount of merchandise (such as Valentine cards and a board game), Disney's Doug was a merchansdising bonanza, and had the most merchandise out of the entire One Saturday Morning block, with Recess in second.

Products ranged from trading cards, toys, lunchboxes, clothes, and more. It spawned a few book series as well: the regular Disney's Doug series, which were chapter book adaptations of various episodes, Doug Chronicles, which were unique-to-chapter book stories, and Doug Mysteries, which were also unique to the book, with mystery plots not seen in the television series. Picture books were also released for younger fans. A video game, Doug's Big Game, was released in 2000 for the Game Boy Color.

Comics appeared in Disney Adventures from 1996 to 2002. Toys of the series were given out at Jack-In-The-Box restaurants in 1996, and then later at McDonald's in 1999 to promote the movie's VHS release. (Hardee's restaurants had previously given out "cruiser" figurines of Doug and Porkchop in a 1994 Nicktoons promotion, which also included sister series Rugrats, Ren and Stimpy, and Rocko's Modern Life.)

While merchandise came to a halt in 2000, t-shirts of the series have been appearing in Hot Topic stores since late 2009, though they are based on the Nickelodeon series.

In 2018, Funko vinyl figures based on Disney's Doug were released.

Changes From The Original

There were many changes from the original, which has prompted fans of the original series to declare this version as the moment when the show "jumped the shark". In fact, most reviews for this version of the show were mixed, compared to the positive the original had. Many of these changes were implemented in the very first episode.

Jim Jinkins maintains most of the changes were his own idea and that he doesn't regret signing with Disney as it gave him a chance to tell more Doug stories, but has also mentioned he was less "hands-on" with the Disney series than with the Nickelodeon series, so he generally agrees with fans that the Nickelodeon episodes were better because for him they were more "true to life".

Changes to the show

Retrieved from "https://doug.fandom.com/wiki/Disney%27s_Doug?oldid=13957"
Community content is available under CC-BY-SA unless otherwise noted.