Connie Benge is a recurring character and one of Doug Funnie's friends throughout the series.

Connie is a sweet, naive, heavy-set girl in the Nickelodeon series. She seems to have a small crush on Doug. She once attempts to ask Doug out to a dance, but Doug invents a fake dying cousin in order to get out of it, so Patti can ask him. Eventually, he tells her the truth and she forgives him, telling him all of the times she lied for similar reasons.

Roger and his gang enjoy tormenting Connie on occasion. She finally retaliated in the episode "Doug Throws a Party": after Roger yanked off the hat she was wearing and exposed her embarrassingly bad haircut, she punched Roger in the gut and yelled, "Why don't you grow up, you big baby?!", temporarily stunning everyone else in the room to silence until she exclaimed, "What are you all looking at? Let's party!"

In the Disney series, Connie lost weight, this being explained by having her spend the summer at Camp Make-You-Over.

These are pictures of a bad haircut Connie once got. 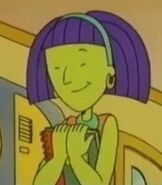 Add a photo to this gallery
Retrieved from "https://doug.fandom.com/wiki/Connie_Benge?oldid=13998"
Community content is available under CC-BY-SA unless otherwise noted.