Roger
Chalky Studebaker is a student at Bluffington School, and also renowned as one of its best students.

A popular student at Bluffington School, Chalky is a good-natured and all-around talented individual, who strives to be the best at everything he can be. Chalky lives at home with his father, Mr. Studebaker, a man whose wise advice has ensured the success of all of Chalky's endeavors thus far. But secretly, Chalky is trapped within in the shadow of his older unseen brother, Cliff, who has amassed and bettered all of Chalky's achievements in life.

Chalky's sibling inferiority complex finally came to a head when his scheduled football practice interfered with his studies, and he failed to prepare for a test. Doug, who studied hard for the exam, is accused of cheating. Doug tries to explain he got the good grade fair and square, but is not believed on account of his somewhat checkered past, whereas Chalky is believed to be the star pupil who would never do anything wrong. In order to clear his name and avoid having to take the re-test, Doug attempts to hunt down Chalky and question him about the incident. This proves difficult, and Doug realizes that Chalky is avoiding him because of his guilt. Eventually tracking him to his house, Chalky desperately attempts to convince Doug to take the blame, citing all the times he had helped Doug in the past. Doug reluctantly agrees, and after an encounter with Mr. Studebaker, Doug learns of Chalky's secret war with his brother. While Mr. Studebaker is bragging to Doug about his son's achievements, a visibly annoyed Doug mumbles to himself that Chalky is a cheater. However, Mr. Studebaker overhears this comment and questions him about it, which causes Chalky to confess. Mr. Studebaker then realizes he may be putting too much pressure on Chalky; however he is also angry about the cheating and trying to make Doug the fall guy. Chalky eventually agrees to re-take the test, and sits out during the football game to do it. 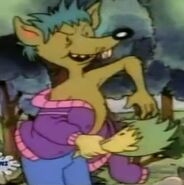