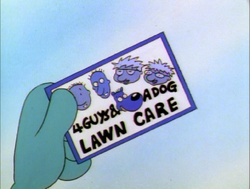 4 Guys & A Dog Lawn Care is a lawn care service created by Doug Funnie in the episode Doug Inc. Their base of operation is in the Funnie's garage. Their service acts upon three main principles:

Be polite
Act professional
Smile when they hand you money.

Doug wanted to earn money to buy a skateboard so he decides to mow lawns for his neighbors. After realizing how slow the money was coming in, he decides to ask Bill Bluff for advice. Mr. Bluff tells him that he hired a crew to work for him. Doug recruits Skeeter, who was lounging around doing nothing, and the Sleech twins, who were also trying to raise money to buy a digital synthesizer card. Although they were making a lot of money, Doug had to pay each member for their work, leaving him with a small amount. In order to remedy the problem, Doug suggests they should expand the area they cover and pool their money together. Although they were making a lot of money, the others believed Doug began treating them poorly and unfairly so they organized a strike. Doug went solo to earn the last amount he needed for his skateboard, but when he talks to Mr. Bluff again, he learns the true value of friendship. He buys his friends tickets to Funky Town.

Retrieved from "https://doug.fandom.com/wiki/4_Guys_%26_A_Dog_Lawn_Care?oldid=11477"
Community content is available under CC-BY-SA unless otherwise noted.