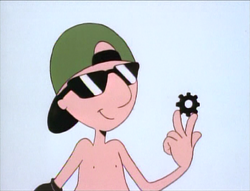 "Call Me" is a rap rock song preformed by Doug Funnie in his imagination in Doug's Secret Song. The song features Patti Mayonnaise, Beebe Bluff, and Connie Benge as back up rappers and dancers. It was released under "Jumbo Records".

Doug: Yo, yo, yo, what’s up? Doug's my name and cool's my game. I got a lot of cool to give and I need the same. If you like my style and want to talk awhile just call me!

Doug: If you're trying to ring my number and can't get through, baby, don't you give up cause I really need you to tell me all those things I wanna hear I need a homegirl's voice whispering in my ear.

Retrieved from "https://doug.fandom.com/wiki/%22Call_Me%22?oldid=12675"
Community content is available under CC-BY-SA unless otherwise noted.